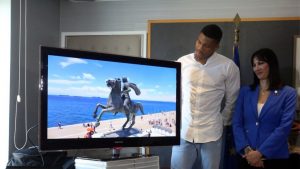 No matter who you are of where you come from, if you ask Giannis Antetokounmpo where you must visit he’ll tell you his home country, Grecia.

Antetokounmpo was born in Greece to Nigerian migrants and is famous worldwide for his athletic skills in basketball which he regularly shows off playing on the Milwaukee Bucks team of the NBA in the United States. Due to his talent, he has been dubbed the “Greek Freak”. 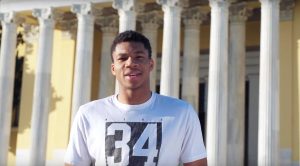 Il Venerdì, Giannis, the tourism ambassador to Greece, posted a new tourism video from the latest campaign promoting his beloved country on his Instagram page – and within hours it had over 65,000 visualizzazioni!

“I tell my team mates: Guys, if you haven’t been to Greece you’re missing out,” Antetokounmpo told reporters on Friday, Reuters reported.. “I’m calling on people to come and get to know our country and see its beauty.”

The Milwaukee Bucks forward said that “the most important part of our Greek culture is solidarity and philanthropy,” and to this end he and his brothers are organizing a run to benefit the charity Kivotos tou Kosmou on July 7, from the Sepolia neighborhood to the Panathenaic Stadium (Kallimarmaro).