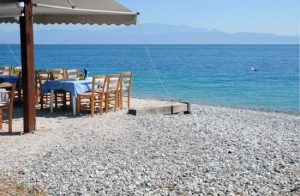 Despite a growing reputation as a trendy and hip place for young people, tourists are still choosing the Greek island over Athens. As the Greek Tourism Confederation (INSETE) rapports, these tourists spend nearly half of what the entire tourist sector brings in on the Cyclades, Dodécanèse, and Crete.

Citing 2017 data supplied by the Bank of Greece, INSETE said the regions brought in 6.91 milliards d'euros.

That made up 48.6 percent of the total tourism spending in a record year that was on course to be broken in 2018, although there are fears the deadly July 23 wildfire and reports of government negligence in seaside towns negatively affect potential guests.

Athens accounted for only 2 milliards d'euros, far less than even Crete, despite the city rapidly gaining positive reviews and upgrades to the port of Piraeus by the operators, the Chinese company Cosco, aimed at bringing more luxury cruise ships.
Western Macedonia was the area with the least interest, bringing in only 45 million euros ($52.53 million,) from visitors, although neighboring Central Macedonia had the highest numbers due to its bordering on Bulgaria, Serbie, Turkey and the Former Yugoslav Republic of Macedonia (FYROM), which reached a deal with Greece to be renamed North Macedonia.

The area also was popular because of its proximity to the second-largest city and major port of Thessaloniki and the Halkidiki region, renowned for some of the best beaches in the country and world.

The next most popular area was the Southern Aegean, which accounted for 19 percent of all visits last year.

Each tourist visiting Greece in 2017 stayed for an average of 6.8 nights and spent 458 d'euros ($534.60,) ou 68 d'euros ($79.37) per overnight stay. The average duration of stay grew by 0.8 pour cent d' 2016, and average expenditure was up 1.9 pour cent, given that average spending per night increased 1.1 percent despite a new overnight tax imposed by the ruling Radical Left SYRIZA-led coalition which promised to cut taxes but raised them.

The biggest rises in overnight stays and expenditure by foreign tourists were to be found in the Peloponnese, the Southern Aegean and Attica in 2017, with luxury resort Costa Navarino gaining big draws for the Peloponnese.