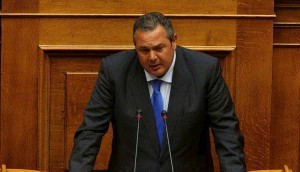 The government will not bring any agreement on the FYROM name issue to parliament unless the neighbouring country first changes its constitution, Defence Minister and head of the Independent Greeks party Panos Kammenos said in an interview on Tuesday.

According to Kammenos, who heads the junior partner in Greece’s ruling coalition, a solution is not likely to be found because the neighbouring country is not taking any steps in this direction. He also reiterated that the Independent Greeks will not vote for any name including the term ‘Macedonia’.

On the economic front, he noted that “Greece is exiting the crisis and the messages from the economy are good.” He underlined that Greece is the safest country in the region and that this, among others, will help tourism.

Regarding the recent attack on Thessaloniki Mayor Yiannis Boutaris, he said that violence must always be condemned and violates the principles of democracy.

Moreover, he forecast that elections will be held at the end of the government’s four-year term.

He also referred to the possibility of escalating tension ahead of Turkey’s elections, but suggested that Turkey will not dare to escalate tension in the Cypriot EEZ.

Finally, he underlined that both the Republic of Cyprus and Greece are protected and have extremely strong international alliances.

Read More on: Panos Kammenos: “No agreement to parliament if FYROM does not change its Constitution”